NocTel supports integrating with LDAP servers to bring telephone directory information into Polycom handsets.  This has been tested and is supported on the following devices:

Phones will need to be issued a reload to pick up the changes.  Enabling, disabling or modifying LDAP settings will cause the phone to reboot when a call is not in progress.  This can be done across a group of devices by using the bulk extension tool to issue a reload.  If the phone is in use, the handset will reboot when all calls have finished. 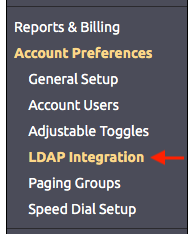 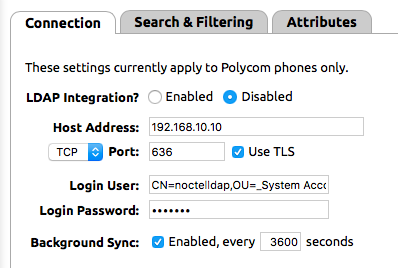 LDAP Integration: Turns on or off the phone integration with the LDAP server.

Host Address: The IP Address or DNS name of your LDAP server.  This must be able to be resolved from the VoIP network and the LDAP host’s firewall will need to allow the phone IP range to access it.

TCP/UDP, Port & TLS: Depending on your LDAP server, you can select different transports, port and whether to encrypt the connection using TLS.   Typically this is configured as TCP/389 for unencrypted or TVP/636 for TLS encrypted connections.

Login User & Login Password:  These are the credentials that the phone will use to authenticate with the LDAP server. The credentials used will differ based on your system and its setup. We recommend using the following format: CN=<value>,OU=<value>, ... ,OU=<value>, DC=<value>, ... ,DC=<value>. The format follows the form “attribute=value,”.

Where CN is the relative distinguished name of container, OU is the Organization Unit and DC is the Domain Component. The OU and DC attributes will need to be included/excluded as they fit your LDAP environment.

Background Sync:  This is normally enabled to allow the handset to update its database every certain number of seconds.  3600 is the default and is sufficient for most installations. 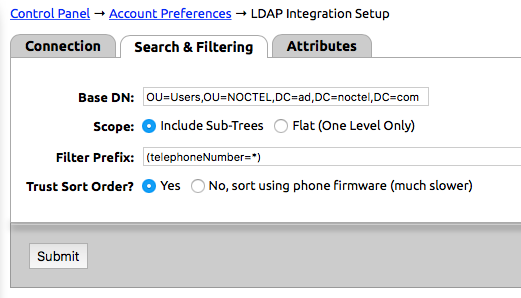 Base DN: This is the search path in the LDAP server for where the phone should start looking.  An example would be:

Scope: Include sub-tree will search all child OU levels below the Base DN specified below.  Flat will only search that specific OU.

Filter Prefix:  This enables filtering of which records should show up.  In our example (telephoneNumber=*) this means anything that has a telephoneNumber will appear.

Trust Sort Order: Yes means that the order in which the LDAP server provides the data to the handset will be used.  No means that after the phone receives the data, it must sort it before displaying.  Yes should typically be used, as the No option can slow down the handset. 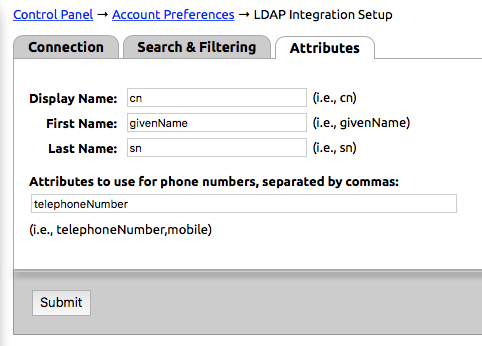 Display Name: The field within LDAP that should be used as the name in the directory.

First Name: The name within LDAP that should be used for the directory person’s first name.

Last Name: The name within LDAP that should be used for the directory person’s last name.

Attributes to use for phone numbers, separated by commas: This is a list of fields that should be displayed on the phone.  This could be telephoneNumber, mobile, or any other field that is in your LDAP directory.