As with any transition of service from one provider to another, there are steps in the process that are simply dreaded. Transitioning phone service and the option of porting numbers - particularly for businesses - is one of those necessary trials that can be fraught with hangups, paperwork, and waiting. What lies beyond the waiting on a port request may be denial for some or all of the numbers submitted for porting.

This is frustrating and often the reasons behind a port request denial are not clear in regard to the what and why, which becomes an issue in of itself. How do you address the reasons for a number port request when it's not disclosed in a particularly helpful way? We’ll take a quick look at where number portability came from and how it works to build a foundation to understanding the process and how to avoid some of the typical errors or inaccuracies that drag it out. The end result (we all hope) being a faster, less stressful port.

A Quick History of Number Porting

Plain Old Telephone Systems (POTS) were the old standard for telecommunications with numbers working like latitudinal and longitudinal coordinates on a map. This harkens back further in history when switchboards were operated by humans to direct calls. Calls to be directed by the operator consisted of three tuples or sets of numbers in a 10 digit long string: the first three designating the area code, the second three for the “exchange” linking the number to a physical switch within the switching station, and the last four digits assigned to the caller/receiver’s carrier.

Until 1982, telecommunications operations in the US and Canada were primarily controlled by AT&T. As part of the Bell System breakup occurring in 1982, smaller regional subsidiaries of AT&T were formed that became their own companies and competitors. To facilitate the diversification in the market now that customers likely had the choice between multiple providers serving overlapping regions, number portability was introduced to encourage competition. If customers with provider options could retain numbers with an established duration of service, the cost to business and reachability in switching providers would not be as significant a factor in deciding which provider to choose. Conversely, if number portability were not introduced, the FCC realized the breakup of AT&T would just result in smaller localized monopolies.

With the breakup of AT&T and the introduction of number portability, things weren’t instantly fixed as we’re oft to idealize. Number portability was actually implemented by the Number Portability Administration Center (NPAC), which was created as a function of the FCC and eventually developed an additional number system called the Location Routing Numbers (LRN) intended to guide Local Number Portability (LNP).

Rather than the LRN corresponding to different switches and entities as noted above, the LRN is a unique number in the same format as a telephone number. The "telephone-like" number represents an entire telephone switch working off a database called the Service Control Point (SCP). In this new model that resembles the old Bell System model, when a number is dialed it is actually querying the SCP database where the caller’s and receiver’s numbers are exchanged and then connected.

The transition to the LRN system enabled the numerically equivalent "telephone" number to not be bound to a specific region, as explained earlier. For example, under the LRN model, an example number such as 503-xxx-xxxx does not necessarily signify it is based in the Portland, Oregon area. The number could easily have originally been held by someone who lived or operated a business number in the area, but moved outside of the 503 area code and ported the number to their new location's carrier. The "503" as the first three digits of the number don't correspond to an area code in the LRN system.

Addressing the Why to a Failed Number Port

Provided the number or numbers were portable as mandated by the FCC, we still need to examine why the port request failed. Before we explore the possibilities, we need to identify what the process looks like:

Provided there are no errors with validation and the port is “simple” involving no more than one line, the port must be completed within one business day per the NPAC. By this definition, most other ports are “complex” by comparison due to murky and arbitrarily established rules typically regarding release date.

Often losing providers enact rules requiring 10 to 20 days for the porting process to be reviewed. During that time, the information provided by the new provider is scrutinized for inaccuracies. It can occur where even a slight error results in the new provider being notified of a port request rejection - typically at the end of the “porting process review” window and with little useful guidance on how to resolve the inaccuracy. If this occurs, the porting process must be repeated dragging out the time when a customer’s numbers are ported and resulting in repeated follow up communication by the new provider to try to sort out the inaccuracies that caused the initial port request to be denied.

This practice is intended to discourage customers from switching providers under the following pretenses:

What Can Be Done to Aid Successful Porting

Admittedly, many are not familiar with the details found in their phone account with their long time provider. This information is usually in a document known as a Customer Service Report (CSR) that can be cryptic and may not include the full list of numbers service is provided for. Fees may be hidden among line items that are unclear or bundled under an item that doesn’t clearly designate what the fee corresponds to. For accounts with many years of service and have had many changes occur, it may be easier to simply pay the bill than try to parse and attempt to understand.

Successful porting to a new provider is facilitated by having a base understanding of your account as it exists before transitioning and exercising due diligence in the information provided to the new provider for the port. Here’s a quick list of things that help the process go faster and smoother:

The unfortunate reality of porting numbers is the losing provider would really prefer to not see you go leading to heavy scrutiny of the request submission and decision process. When your new provider requests information or to review the accuracy of the provided information, it’s to ensure every I is dotted and every T crossed.

While the number porting process can be long and somewhat left to the whims of the losing provider, NocTel offers interim options to keep moving forward with your service transition. These options include temporary phone numbers which your numbers in the porting process can forward to and in some cases, NocTel can install temporary legacy voice gateways to translate your SIP service to work with POTS.

If you’re fretful over the number porting process, let us know - we’ll find a way to get you going even before the numbers port and any hurdles in the process that may happen along the way. 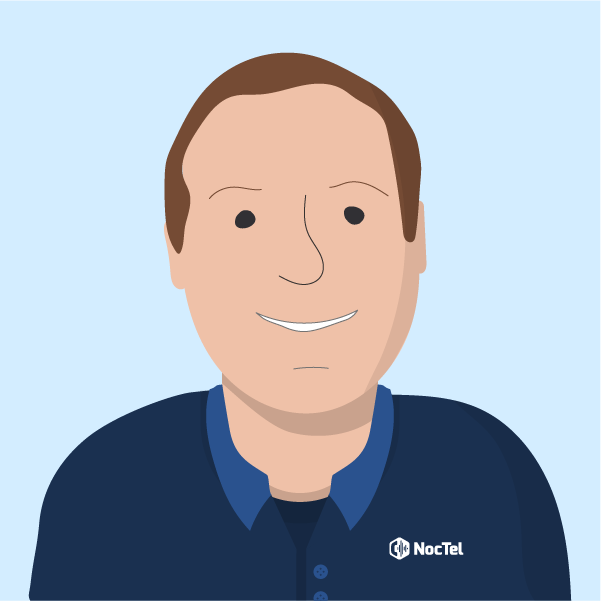 Joey has been with NocTel since 2015, working to provide excellent service and support to our valued customers. Joey works closely with users from the onboarding process and beyond, helping users navigate number porting, account setup, and any support question they might have. When not helping with a lost password or making call routing changes you can find him out exploring the foothills of the Appalachian Mountains where he lives in North Carolina.

Return to all articles